Chloé is being harassed by something invisible, and Adrien and Marinette are immediately on the case. After talking with the concierge of the Grand Paris hotel, where Chloé lives, they discover Chloé had a fight with Sabrina, and had claimed that Sabrina is no longer her friend and is completely invisible to her. Heartbroken over her words, Sabrina was influenced by Hawk Moth, turning into the Vanisher. As Ladybug and Cat Noir fight the Vanisher, who has just shown up, Chloé decides to join in, donning a fake Ladybug costume. However, this only causes the fight to get more difficult and Ladybug forces Chloé to leave, claiming that she is endangering everyone by staying. Chloé tries to tell Ladybug that the akuma is in Sabrina’s rose brooch, but Ladybug does not listen, thinking that she is lying. Only when Chloé has left the scene does Ladybug realize that Chloé was right all along, but despite this, Ladybug 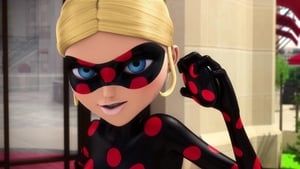